No rush this morning, except to get to breakfast at the inn by ten o’clock, as we thought we’d just be going to Natchez tonight.  It was nice to wake up slowly!  We looked around the inn now that we could see it in the daylight – I had stuck my toes in what I had hoped was the hot tub part of the pool last night, but since it felt the same as the rest of the pool…Kim watched a big ole frog hop right in the pool this morning – made me feel right at home!  We eventually wandered over to the dining room for breakfast, which was a nice buffet.  I had an egg roll (not the Chinese variety), a bite of sausage, some bacon, fried potatoes, some really yummy little apple treats, and cheese blintzes with blueberries.  Nice way to start the day!

As you may have noticed, we’ve been indulging in some mighty good food on this trip, so we thought we might take a little walk this morning in hopes of getting rid of a fried something or two.  Armed with Laurie’s map, we headed off for the visitor center/museum.  Before we had even gone a few blocks, we were glowing.  Seriously.  Like with sweat dripping off of us – it was just a bit humid!  We passed several houses with official-looking plaques and descriptions on them, but according to our map, we were not officially on the walking tour yet.  Where was that visitor center?? 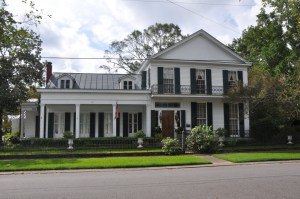 We found it!  And it was air-conditioned!!  We took our time examining the exhibits, and seriously, they had done a good job giving us a taste of what life was like in antebellum St. Francisville.  When we were ready to face the heat again, we started our tour.  There are a lot of old homes here, most of which appear to have been restored and are being lived in today.  We passed the Methodist Episcopal Church, which is now the Methodist Church, several houses with lovely gingerbread trim and wrought iron balconies, the old bank building, the courthouse, and the Episcopal Church.  There was a wonderful old graveyard next to the Episcopal Church, and since it was full of huge old live oaks covered with Spanish moss, it was shady and several degrees cooler, so we took our time exploring it.

We finished our walking tour and made it back to the inn to collect our car, and we went straight to George’s for some cold tea!  They weren’t quite open yet, but we must have looked really hot and thirsty, because they let us have our liquid refreshment!  Now we were off to tour one of the plantation houses in this area, and we had chosen Rosedown, the home of Jefferson Davis’s mother and named for the flowers she loved.  It wasn’t far away, and we got there shortly after eleven, with the sky looking fairly threatening.  Bad news for us – a tour was just underway, and the next one didn’t start until noon.  We decided to pass, and then the lady asked us if we didn’t want to tour the gardens between now and then.  We were going to just have a short stroll through the rose gardens and then leave, until she wanted to charge us half price just for that.  And mind you, it’s late September – there was not all that much in bloom!  So we just said thanks, but no thanks and went on in search of a plantation that suited our schedule.  You can see Rosedown at http://www.crt.state.la.us/parks/irosedown.aspx if you’re interested.

That led us to The Myrtles, which was built in 1796 by General David Bradford, who led the Whisky Rebellion.  Guess he decided to come South after that worked out so well…  Anyway, The Myrtles is haunted, or so the story goes.  We were only allowed to take pictures in one area of the interior of the house, and that was this huge mirror in the entryway.  Even though the glass in the frame has been replaced on multiple occasions, the same markings always appear back on it in the same places.  We were told a story about a slave girl who supposedly haunts the house, but after reading the accounts at http://www.prairieghosts.com/myrtles.html I have decided not to relay what we heard.  Check it out and decide for yourselves!  After our tour, we walked around the grounds for a while, then got some gas and took off for Angola and the Louisiana State Penitentiary.

You know how sometimes you just know you should follow your intuition rather than doing what someone or something else is telling you to do?  Well, this afternoon was one of those times.  Once again, Kim was led astray by her navigator, and we soon found ourselves deep in the woods, first on a road, then a gravel road, then a dirt road, and then on a one-lane dirt road, all going nowhere fast!  We saw few signs of life, other than the “Posted: No Trespassing” signs, so after a while, Kim performed a lovely seven or eight point turn and we went back to the highway we never should have turned off of, and before too long we were at the prison gates. 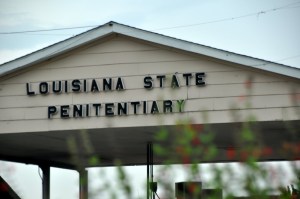 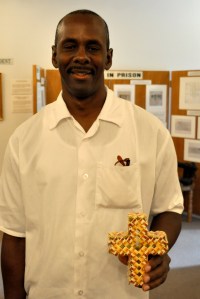 Just outside the gates of the prison was a museum, http://angolamuseum.org about the history of the Louisiana Penitentiary, which was known as one of the bloodiest and most awful prisons in this country.  I found it interesting that the current warden was willing to share that history, although it’s hard to see how far you’ve come unless you’re willing to admit where you were.  This is the prison where “Dead Man Walking” was filmed as well as the place it was written about, and many other prison movies have been filmed here.

We were the only visitors, and soon we were joined by a nice-looking man, all dressed in white.  He proceeded to give us a guided tour of the museum, and it soon became evident that his knowledge was first-hand.  He was the nicest guy, very gentle and soft-spoken, and he will be turning 50 soon.  He’s been incarcerated for 25 years, serving 60 years for aggravated burglary.  Seemed a shame to us – such a heavy sentence – don’t think they pass those out much these days.  He’s coming up for parole, but he’s been turned down twice already…  Anyway, his name is Edrick and we liked him!  He showed us his ‘crafts’ – remember those chains we used to make out of chewing gum wrappers?  He makes all kinds of things using that same technique and cigarette packages.  The museum was really interesting and well worth the out-of-the-way stop.  Later, when we learned there had been an escapee last week, we were glad we had found our way off of the back roads and back onto the highway…

The rain started falling about the time we got back on the road, but it just drizzled on us as we made our way back to Natchez.  Our original plans were to make it there in time for lunch at Mammy’s Cupboard (it was really good!!) but we missed that, so we decided to stop for a treat at The Malt Shop.  We both got chocolate malts and split a shrimp po’boy and enjoyed them on the picnic table out front.  The sky was really gray and threatening, and it was very hot and humid, but  at least it wasn’t raining!  We went back to the Basilica, which we were able to see this time.  Wow – more beautiful stained glass!  There are some gorgeous photos on the website, http://www.stmarybasilica.org and if you make it to Natchez (we highly recommend it!) be sure to stop at see for yourself. 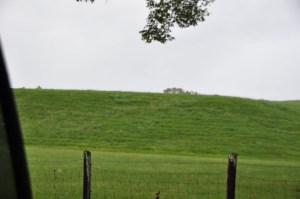 It started raining in earnest as we drove out of Natchez, so that put a damper on our plans to stop in at the places on the Trace that we missed in the dark on our way down.  We did stop at the Emerald Indian Mound, which is huge and centuries old, but then it started pouring.  Kim gamely drove on to Vicksburg through the driving rain, and we were done for the day.  We ordered pizza and did laundry and called it a night.  We were really sorry to have missed getting to spend more time in Natchez on the flip side – we enjoyed it a lot!  FYI, they do ‘pilgrimages’ in the fall (this year it’s now – Sept 26 – Oct 10) and for four weeks in the spring where the plantation homes are on tour with guides in antebellum attire.  It would be a fun time to be there!

A little soggy but overall, I can’t complain about the rain! 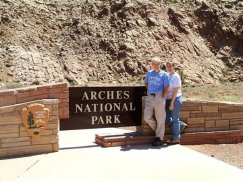 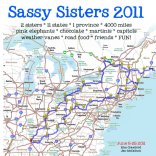 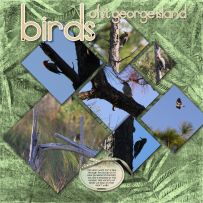 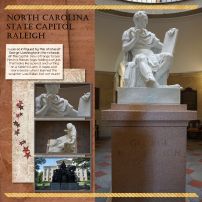