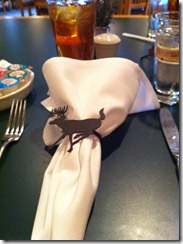 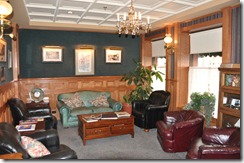 We woke up feeling lucky to have found a room in Red Lodge, and even luckier to have found a room at The Pollard.  Even better, breakfast was included in the price, so it was our kind of place! We made our way down to the dining room and prepared for gastronomic delights!  We had the most delightful server who greeted us with a cheery smile and even made favorable comments about the Duke shirt I was wearing.  The breakfast choices all looked delicious and made it hard for us to choose just one.  Kim took the healthy route with the fruit plate, and I was lured in by goat cheese, as usual.  It’s a temptation I can rarely refuse, and today’s pairing was an asparagus and goat cheese omelet.  Mmmmm!!!  Everything about breakfast was perfect – darling napkin rings, cloth napkins, a civilized setting, orchids on our plates, a happy server, and scrumptious food.  If only every day could start this way!  After breakfast, we poked around the hotel for a bit.  We loved the beveled glass that we found in many of the common areas.  If you should ever find yourself in Red Lodge, we give The Pollard high marks! 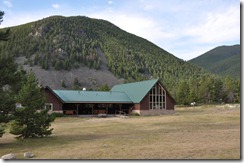 Even though we were not as far along as we thought we might be by now, we decided to take the scenic route to Big Sky.  The Beartooth Pass Highway is thought by many to be one of the most beautiful roads in America.  It cuts through the majestic Rocky Mountains in a series of switchbacks and hairpin curves, each with breathtaking views.  Even better, it would put us off near an entrance to one of our favorite National Parks, Yellowstone!  But first, we had a detour to make.  One of the reasons we were in Red Lodge was because of Kim’s summer job at Timbercrest Camp, a Girl Scout camp just a few miles away, so of course we had to go check out her old stomping grounds. The ride up was on a tree-lined, little-used road, and I could almost see why my sister, who HATED camp when we were kids (I tried to spend the whole summer at camp!) had loved this place.  When we emerged from the car to look around, I could hear the rushing water of a creek just below us.  The entire camp was encircled by gorgeous mountains, and the smell of evergreens and the sound of silence is unlike anything we experience on a daily basis.  We were a bit surprised that the camp was not full of campers in early August, as it did not seem to be abandoned.  There were still cots in the cabins and chairs and tables in the dining hall, but it was all locked up.  At least we got to look around uninhibited!  Maybe girls today aren’t interested in spending a week in a relatively primitive setting, with no flush toilets, blow dryers, televisions, or cell phone service.  Their loss! 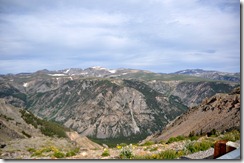 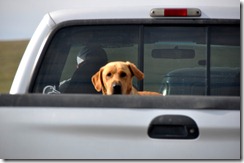 After our little walk down Kim’s Memory Lane, we headed for Beartooth.  It was a wonderful drive, marred only by a good bit of road construction taking place.  That’s always a hazard of a summer trip in the northern states, since summer is the only time much work of that kind gets done.  We had one place where we had to stop for about twenty or thirty minutes to wait our turn for a one-lane ride, but even that was fun.  We were behind a pickup with the cutest dog in it, and we enjoyed listening to the tales of the many motorcyclists out that day.  While I suspect that there are always plenty of bikers out on these fantastic roads on a perfect day like this one, the fact that this was Bike Week in nearby Sturgis, South Dakota, even added to those numbers.  It would be a wonderful way to see the USA!  Just after we had finished our escorted one-lane miles we came across a small flock of mountain goats near the Wyoming border.  We were hoping we’d get to see plenty of wildlife once we got to Yellowstone, too. 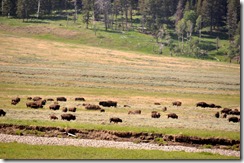 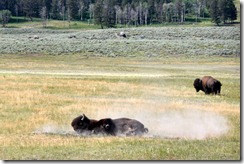 Before long we came to the northeast entrance of the Park and we were  almost immediately rewarded with a spectacular sight – fields FULL of bison!  We got really tickled when one big ole bison dropped down into the dirt and started rolling around.  Dust was flying everywhere and he looked so happy – guess he just needed his back scratched! We drove through Mammoth Hot Springs, which was bustling with activity, but once we got back on the figure eight road, most of the traffic was going the opposite direction – lucky us!  A bit later we saw LOTS of cars pulled off to the side of the road and even some rangers directing traffic, so we knew it must be something good, and it was – a black bear was cavorting on the hillside!  And some people who had left their brains at home were hopping out of their cars and campers, cameras in hand, and heading straight for it.  The rangers were doing their best to remain calm and get people back to their cars, but some people were actually arguing with them!  They are probably the ones who would sue if the bear attacked them – go figure!  As we got closer to the geyser area of the park we expected to see herds of elk, and we did – so fun!  There was more road construction, and while we were stopped, one of the bikers who was behind us drove up alongside us to chat.  He had been behind us on Beartooth Pass and recognized our car.  He and his friend were from Regina, Saskatchewan, and they continued south toward Lake Yellowstone as we exited the park at West Yellowstone.  HERE is a great guide to what you may want to do/see at Yellowstone. 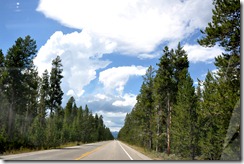 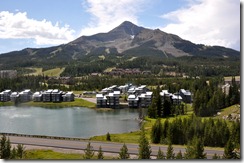 Once we were on the road to Big Sky, it was a pretty straight shot, and before we knew it, we were passing Buck’s T-4 (a restaurant that had been recommended to us by our Red Lodge friends) and soon we were headed up the mountain to Jan and Ed’s place.  We were in luck for a few days as we would be staying in a fantastic condo belonging to Rex’s cousin and her husband.  It was so nice!!!  It was so hot when we got there that we put on our shorts and pulled the cushions out for the furniture on the rooftop balcony and popped a chilly one.  About the time I got comfortable and had my kindle in hand, it clouded up and got chilly!  The view was spectacular and it was really great to be in a real home and in the same place for two nights!  We were about to get hungry, so we opted for an early dinner and rode back down the mountain to Buck’s.  YUM!  One of our best meals so far!!  We started out with a couple of drinks – a gin and tonic for Kim and a huckleberry mojito for me, and then Kim had the prime rib and popover special and I had bison.  Both were served with mashed potatoes and broccolini and we shared a delicious wedge salad.  We talked to a delightful couple from Billings at the table next to us – they started salivating (but resisted) when they saw our chili chocolate pots de creme.  Oh man, was it ever GOOD!! 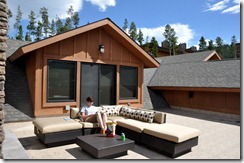 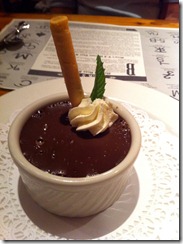 Once we were back at the condo, we attempted to get online, but we had no luck.  Rats!  Oh, and did I mention that the condo was on the third floor and that the elevator decided to go on the fritz right before we got there?  At least we were getting our exercise!  We ended up just watching a little TV and chilling until bedtime. What a perfect day!

Dreaming of dark, rich, chocolate with a chili pepper kick, 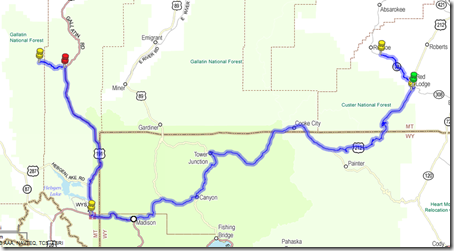