Thanks to our superb server, Jacee at Centro Pizza, we knew that the place to go for breakfast this morning (another Sunday morning in Utah – sort of limits your breakfast choices!) was the All-American Diner, and we even knew where it was, since we had passed it on our way to dinner the night before.  We were not steered wrong – I had a standard All-American breakfast of eggs over easy, bacon, and hash browns with a splurge of a pancake.  It was all great, and I didn’t even eat all of the pancake or the potatoes.  It was about 9:30 when we started off on what would be one of our most challenging drives ever on our trip across what must be America’s strangest state, at least as far as terrain and topography are concerned!  The drive started out innocently enough, and we were on familiar territory, as we had stayed three nights in Cedar City on our very first Sassy Sister trip in 2006, on our way home from Route 66.  The first part of our journey took us through the Dixie National Forest until we turned onto Utah Scenic Byway 12 (an All-American Road), which took us past Bryce Canyon National Park, but we didn’t stop since we had spent a day there previously. 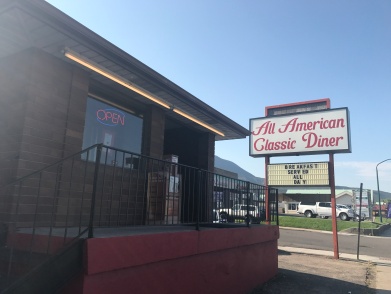 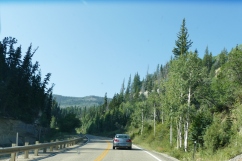 Lots of cedars on the road out of Cedar City

We turned onto Utah Hwy 12 just before Bryce Canyon

Soon the cedars were no more 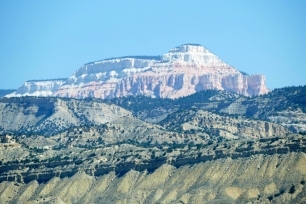 And the terrain changed from the hoodoos of Bryce to this

And the road got a bit curvier

We made a quick stop at the Grand Staircase/Escalante National Monument Visitor Center in Cannonville and talked to a friendly ranger there who suggested that we stop at the Escalante Petrified Forest State Park and do a short hike there, since we really didn’t have time to explore the Grand Staircase much more than that.  It wasn’t too long before we traveled the 32 miles to the park, where the ranger there didn’t seem to think we would be up to the challenge of the short but steep hike up to see the petrified trees. Needless to say, that decided it.  We filled our water bottles, put on sunscreen, hats, and sunglasses, and after checking out the 50′ petrified tree at the base of the hill, headed up the dirt trail, which was almost completely unshaded.  Mrs. Ranger had given us a map that had info for each of the numbered stops along the trail, so we learned a bit as we hiked.  The trail was at its steepest early on, so the going was hardest at the beginning. Since we were just off of Vernal Fall though, it was a piece of cake!  One of the interesting things we learned was that the town of Escalante was named for a Spanish Franciscan priest who had explored the area in 1776, looking for an overland route from Santa Fe, New Mexico to Monterey, California.

Looking down on the town of Escalante 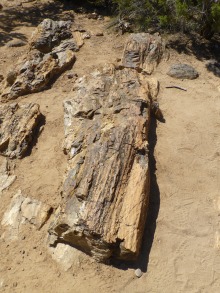 A closer look reveals a beautiful palette of colors 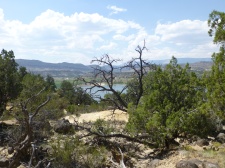 From the top, looking down to the lake at the park’s campground.

With a little hike under our belts, we were ready for some more driving.  We thought! What no one had mentioned to us (and since we had done no research, we didn’t know) is that the next section of the road we would be traveling was near another road called ‘Hell’s Backbone‘, which is a gravel road built by the Civilian Conservation Corps in 1933, and let me just say that I am sure it is very aptly named!  I have to give total props to Kim, who drove Highway 12 masterfully and didn’t get to enjoy the spectacle nearly as much as I did.  The road featured several sections of 8 to 10% grades, no guardrails, and lots of curves.  The best news was that the road was obviously recently repaved!  The other good news – evidently, most people travel on interstate highways!  We were both thankful that we didn’t come upon any crazy bicyclists on this road and were stunned to read (days later) that Colin had taken this exact route on his travel the opposite direction!  Colin, when you read this, we are SO GLAD you made it safely!! These next photos need no explanation – the first ones were taken over about a 15 minute time period, and the ones with the aspen trees were about 25 minutes after that.

About thirty minutes later, we turned off of Hwy 12 onto Hwy 24 at Torrey and soon found ourselves in Capitol Reef National Park, with yet another stunning terrain change. Capitol Dome is a Navajo sandstone feature that was named for its resemblance to the US Capitol. This dome, along with the nearly 100-mile Waterpocket Fold (a barrier of rock that obstructed early travelers like a barrier “reef”), inspired the park’s name.  Capitol Reef became a National Park in 1937, and it has three main districts – the Fruita area, which was a Mormon settlement with a school and orchards, which are one of the largest historic orchards in the National Park Service with almost 3,000 trees, including apple, peach, pear, apricot, cherry, and plum; the Waterpocket District, which encompasses the 100 mile long Waterpocket Fold; and Cathedral Valley, which is a backcountry area.  While we would have liked to have explored this park more, it was quite hot and we still had a long way to go to get to our destination before dark.  And if the road ahead was like the one we had just traveled… Anyway, we stopped in the Fruita district to see the petroglyphs.

We continued on Hwy 24 until we reached Hanksville, where we turned south on Hwy 95 (the Bicentennial Highway), headed for Glen Canyon National Recreation Area and Natural Bridges National Monument, and ultimately, the town of Blanding.  Kim was almost over it with the driving (and I can see why) and we really wanted to make sure we were situated well before dark, so we mostly enjoyed the views from the car.  We stopped at an overlook to see Lake Powell, and we were in for a nice surprise.  From the Hite Overlook (which was quite a ways up and a mile or so off the road) we could see not only Lake Powell, but also the bridge over the Colorado River that we would be crossing soon.

Before long, we were pulling into Blanding, not sure whether or not we would be happy with our choice of a place to stay.  Let’s just say it was not up to our usual standards, and if we had known then what we know now, we would have gone a bit farther up the road. But we were safe and had beds and a shower – and air conditioning, so no complaints. Before we checked in, we drove around town a bit since it was still light and found pretty much the only place to eat, which looked okay.  Turned out, we really enjoyed the Homestead Steak House!

We made it, well before dark!

We ate outside at the Homestead Steak House 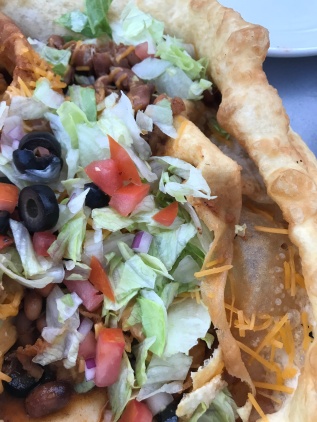 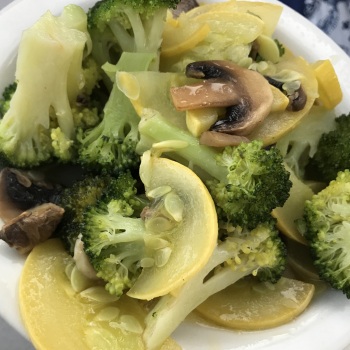 and a side of fresh veggies

and a made in house chocolate ice cream cake

2 thoughts on “Surviving the Surreal” 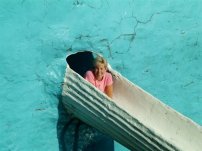 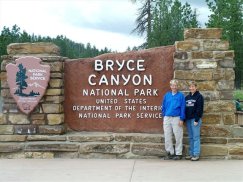 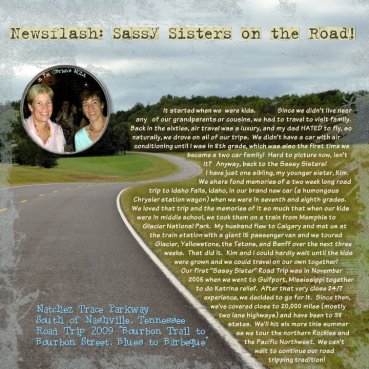 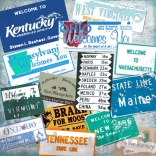 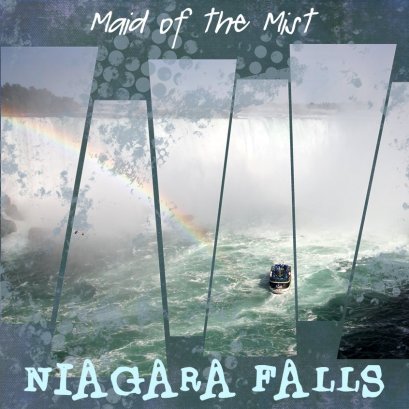 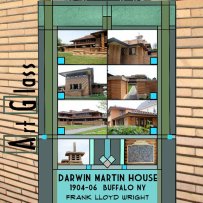 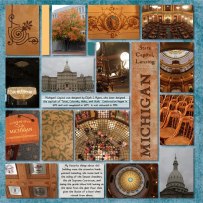 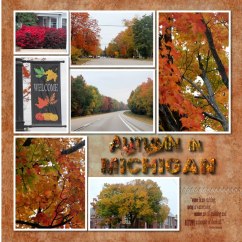 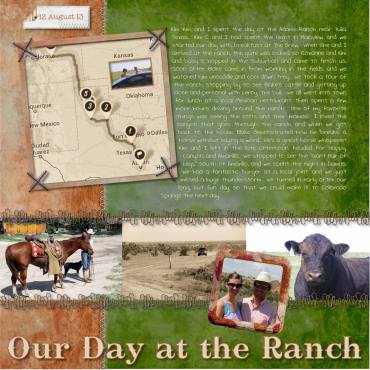 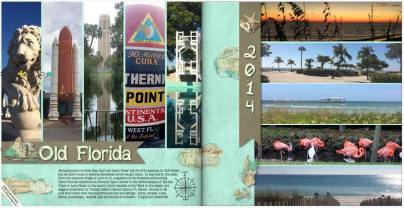